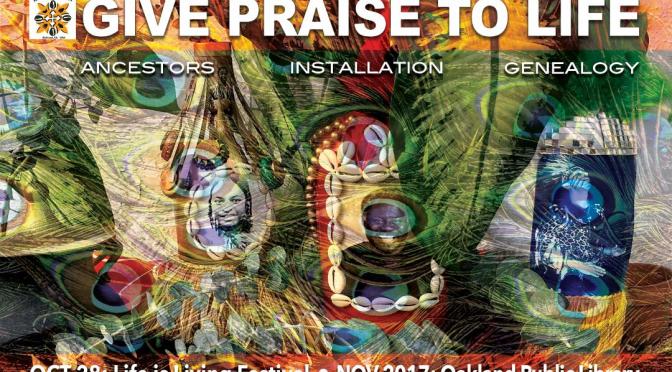 Most recently I took on the commission of installing an Ancestral Community altar paying homage to beloved Arts and Cultural leaders who’ve transitioned into the Ancestral realm, all-knowing that this calling was a whole lot greater than the actual work.  Thinking from a genealogical perspective led me to the daunting task to actually research sunrise and sunset dates associated with the names located.  Eventually, another tier added to these efforts was to locate the place of birth and place of death.

Reared, educated, trained, performed, in the richness of the Bay Area’s Cultural landscape, my honing grounds is that of the African Dance and Drum Community in Oakland, California preceded by my Mother. [see nzoCALIFA dance.blog post] Mentored as a Cultural gatekeeper, now prospering these gifts into a Dance mediumship for service, I envision this opportunity for Ancestral and Communal healing, a mission shared by 2 of my Dance kinship who serve as co-commissioners for Oakland’s Life is Living Festival: African in Oakland – Dance Zone.  United we bring into focus, The Malonga Casquelourd Center for the Arts, celebrated Arts portal and cultural cradle place nationally renown also represents for us as “Nzo”, our house, village house and or sacred home, with a mission to elevate its vitality by intentionally honoring our beloved transitioned, treasuring their contributory gifts today.

Immediately the need is to remember our dead transitioned and restore Ancestral rites of atonement in the Community. Approaching this process like a “Spiritual Architect” coin-phrased by Pastor Yolanda Batts of Brooklyn’s Celebration Spiritual Center, I bring my tools as a Field Research Genealogist to the table, ready to shed light upon those good folks who I’ve known through my Oakland Village of African Dance, Drum, and Culture — more than just to say their names, it is important to share their stories cultivating the wealth of knowledge already invested in the Community and to encourage such exchange among each other.  From a collected roster of names collected, over 40 to date and growing, my first attempt guided me to research an International comrade who used to wail the call of Zulu warriors with songs of Freedom envisioning the unification of Africa.  As an expatriate of apartheid South Africa, I also learned that Brother Sechaba J. Mokoena was a touring member of critically acclaimed South Africa musical “Ipi N’Tombi” eventually defecting to the United States in the 80’s,  becoming a resident of the Bay Area.

#nzoCALIFAncestry: I located the record above, showing Brother Sechaba’s birthdate and as a resident of Oakland, California, North Oakland, known as the Upper Telegraph area today; he flourished as a founding member of prominent South African Cultural Groups, Zulu Spear band, and U-Zulu Dance Theatre, always keeping his vision of a United Africa. I am still locating his death date, I have an approximate year based off my recollection at the former Citicentre Dance Theatre back in 2004.

And if ever there’d be a living archive so true to date, that’d capture his views, this video documentary discovered from online research delivers!  Listen to the message and learn more about Brother Sechaba.  AMANDLA Brother Sechaba Mokoena!

New Orleans is a myriad of dynamic movement on the ground, filled with voluminous aural sensory, cosmical crossings and most certainly movement through the people. In July 2015, I was prepping for full immersion into New Orleans Historic Collection “Purchased Lives” Exhibit and the American Slave Trade 1808-1865 as part of my field-research works; The experience was an awe-inspiring ethereal visual display of artifacts, accounts, bills, ledgers and clothing, citing various landmarks throughout the historic French Quarter once fully immersed in a thriving economy, and said to be the site of the largest Slave Market in antebellum America.

“…more than two million people were forcibly moved within the boundaries of the United States and its territories…Owners and traders in the Upper South—Maryland, North Carolina, Virginia and Washington, DC—sold and shipped surplus laborers to the expanding Lower South.” ~civilrightsmuseum.org

Sounds like the history of any of your folks?! I know NOW that it most certainly does of some of mine —  Learn more about my sojourn from a previous blog post :

#Maafa commemoration March in conjunction with the #BYP100NOLA taking a moment to stand on the corner of Chartres and St. Louis in the French Quarter which was once the site of one of the largest slave markets. Through the efforts of this same movement, the originally “decor” including slave chains and whips were removed after a direct community led action during Essence Fest.  A plaque on the restaurant that sits on the corner , “The Original Pierre Maspero Restaurant reads:

…I’ve come too far to turn back now. Since 2009, the fascinating stories of Genealogy bloggers kept me engross in the intrigue and unearthing finds of African American agents like myself, interested to rebuild their Family Trees, inspiring others along the way.  6 or 7 years later, I weather the daunting trail ways of researching my Family History, 4 lines strong and write about them– Maternal: Waters and Culverson and Paternal: Calloway and Hunter.   This journey began as a Family History project, expanding into life works, serving as an important resource tool giving me greater technological and field research access that’d facilitate me working my lines.  So far, utilizing associative Genealogical tools of investigation, like researching blood types, analyzing DNA tests, to altering your health and nutrition lifestyle changes can positively impact your code of behavior, that just may extend your life. 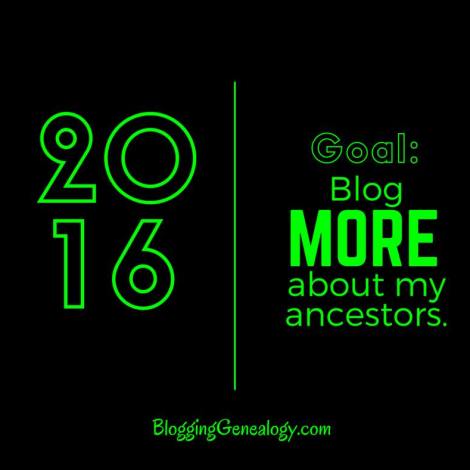 Tips, Testimonies and Genealogical triumphs serving as fuel to power my mission forward to blog about the byways and pathways of my Ancestors. #wRiteOn

’tis a courageous feat to tell the stories of those who are no longer here, yet our African Ancestral Spiritual traditions stand as Ancient practice influencing leading Spiritual philosophies the World over. I benefit by birthright to access these sacred codes encoded my life script. So to this date, in firm dedication forward, I shall BLOG MORE ABOUT MY ANCESTORS. *and thinking on a Master Plan* ~R. Waters Calloway 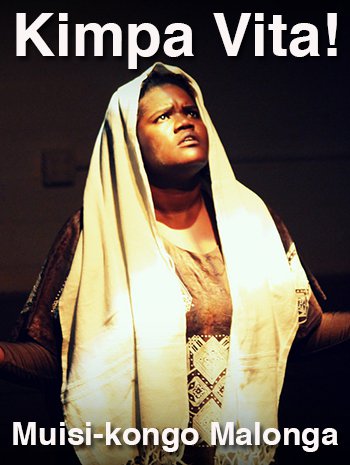 My humble Steps into #Dancestory2013